When you play Motorsport Manager, you’ll often feel like you’re firmly in the hot seat. But your fate is tied up with that of the drivers who take to the track for your team across the world.

So it’s only natural that you build relationships with those virtual drivers who get behind the wheel for you. Sure, they might break your heart from time to time when they suddenly leave your team to join a better one (weeps) but the memories they offer along the way are as unforgettable as their cold hearted betrayals.

That’s why we asked you, the MM community, to share the stories of your favourite MM drivers with us on Twitter. And here are our top picks from your epic tales.

When you start out in Motorsport Manager, chances are you need money to get your team going. One of the easiest ways to do this is to scout and hire a pay driver who’ll slide you some cash your way to let them drive. But for the most part, letting someone pay your way onto your team isn’t likely to deliver much on the race track.

But if you know about Enrique Lara, then you’ll know that isn’t always the case. You can discover Lara early in the game on PC. But rather than getting a greenhorn with deep pockets, you actually get a pretty experienced and stable driver to build your team with.

Enrique Lara, super good potential and a pay driver? Sign me right up. Then of course the man, the myth, the legend, Rafael Rodriguez. Won every race with him one season in the WMC. He’s unstoppable with a decent car

Loads of people made the Lara suggestion to us on Twitter, but we’re giving Seth Rusnell the credit this time because he also brought up another MM legend in the form of Rafael Rodriguez. What a driver!

The driver who accidentally shares an F1 driver’s name

New driver names are randomly generated in Motorsport Manager. We wanted to make that abundantly clear before we showed you M Syafa’at’s favourite driver and you started accusing us of something.

Got a perfect racer in the form of my Young Development Driver named… Pastor Maldonado. He won 2 Asia Pacific titles with me and 4 World Championship titles. The universe ultimate joke. pic.twitter.com/ThyFIcr4Sj

Pastor Maldonado has some pretty impressive numbers in Motorsport Manager. He’s got 20s across the board in all key attributes, he’s got decent sponsor potential, he’s benefiting from some useful trait boosts and he’s even got a world championship to his name.

What he doesn’t have is the baggage of the real world Pastor Maldonado and, more specifically, the carefully edited five minute long (!) Youtube crash compilation video. You can’t have everything, eh?

We also wanted to make it clear that our new 3D driver models in Motorsport Manager Mobile 3 are also generated randomly. Why? Well, because MM fan Martin Long has built a dominant motorsport team off the back of what looks like identical twins.

Ok, strictly speaking, the drivers that Martin Long loves aren’t really twins. Nicole Bonner and Kaylene Ricciardo are not related to one another, don’t share the same nationality and, crucially, are not the same age.

But we had to give a shout out to Long’s driver line up because his two lead drivers are eerily similar to one another, both in terms of appearance and quality.

I’ve managed to end up with identical twins separated at birth in my team. One related to Ricciardo no less! pic.twitter.com/MeDfeuJE0Z

This is obviously great for Martin’s hopes of winning constructor’s championship. But we can only imagine the confusion that they could cause in the driver’s championship if they ever chose to switch place on a podium.

Motorsport Manager, in case you didn’t know, is developed in the UK. This means that we naturally love all things British, like queuing politely and arguing about which order to put jam and cream onto a scone.

This means it is only natural for us to extend that affection to the virtual race course as well and to give Daniel B a nod for bringing up the ever excellent Abby Gibson.

In the screenshot he shared, the British driver has racked up over 50 podiums, 29 race wins and four world championships – with the majority coming in the last five years.

That’s pretty impressive stuff and suggests that Gibson is as strong as a cup of tea left brewing for over an hour. Potent.

The best of the rest

Those are some of our absolute favourite stories from your tweets. But we got so many responses that we wanted to share a few more tweets with you anyway to give you a flavour of our fan’s favourite drivers.

Andre Gomes, but don’t tell him. Yes, I had to put a bullet to him at the end of the 2018 season, but he certainly did liven the place up. And he was more interesting than Max Porter, who drives better but whose only flaw was to not keep his zip done up. https://t.co/pzYPXXJB9M

Frankie Parkes and Bjorn Bjelland best two without a doubt, if you say otherwise you’re wrong

Egle Baravykas, I know she is not one of the best but she is from my small small country Lithuania, I wouldn’t have though that a small counrty like Lithuania would be created in this game

Turned out to be the next Senna and I think everyone should hire him if they’re looking for a reliable driver who always delivers.

Want to chat more about your favourite MM drivers and the rest of the game? Head over to the Motorsport Manager Reddit here and follow us on Twitter to get involved. 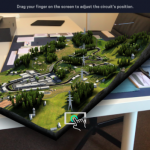